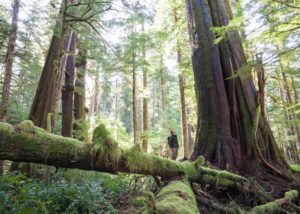 Area description: The Edinburgh Grove, the most spectacular part of the Edinburgh Mountain Ancient Forest on its southwestern side, has also been nicknamed the ‘Eden Grove’. The area is home to elk, deer, bears, wolves, cougars, and some of the finest and last valley-bottom ancient redcedar stands left on Earth. More than half of the Edinburgh Mountain Ancient Forest is open for logging, while other parts are protected as a ‘core’ Wildlife Habitat Area (the ‘buffer’ zone can still be logged, and has already been logged in several areas) for the endangered Queen Charlotte Goshawk, as an Ungulate Winter Range, and as Old-Growth Management Areas.

Canada’s 2nd largest Douglas-fir tree, ‘Big Lonely Doug’, was once part of the Edinburgh Grove until its surrounding neighbours were clearcut in a 2012 cutblock. The Edinburgh Mountain Ancient Forest includes about 1500 hectares of intact ancient forest, none of which are included in legislated protected areas, and which is the biggest contiguous tract of unprotected ancient forest on southern Vancouver Island south of Barkley Sound. About 60% or more of the grove is open for logging, while about 40% is in tenuous forest reserves which currently prohibit logging (ie. within Old-Growth Management Areas and an Ungulate Winter Range, which are regulatory protections that can be changed by the BC Cabinet without a vote in the Legislative Assembly).

In addition, all of the Grove is included within a 2100 hectare Wildlife Habitat Area, which still legally allows clearcut logging in almost 90% of the designation itself. In particular the Lower Grove has some high concentrations of giant Douglas-firs and western redcedars. In 2010 and 2012 some of the very largest trees in Canada – some 13 to 16 feet in diameter – were logged within this Wildlife Habitat Area.