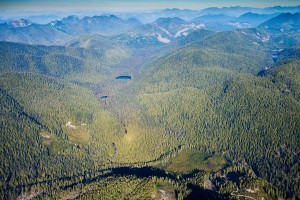 Looking down at the Central Walbran Valley & the Castle Grove. Forests in the background are protected within the Carmanah Walbran Provincial Park. Photo: TJ Watt

Area description: The Central Walbran Valley on southern Vancouver Island is the grandest old-growth rainforest in Canada. The area is jam-packed with hundreds of the monumental redcedars, especially in the spectacular “Castle Grove,” which is perhaps the most extensive stand of near record-sized cedars on Earth. Marbled murrelets, screech owls, Queen Charlotte goshawks, red-legged frogs, cougars, black bears, and elk all live here, while steelhead and coho spawn in the rivers. Because of the mild climate and high rainfall, the Walbran, Carmanah, Gordon and San Juan Valleys on southern Vancouver Island have the best tree-growing conditions in Canada, resulting in nearly all of BC’s record-sized trees in the region. Unfortunately this also makes the area a prime target for logging.

The 500 hectare Central Walbran Valley is part of the 13,000 hectare Walbran Valley, of which about 5500 hectares of the valley is protected in the Carmanah-Walbran Provincial Park and 7500 hectares of the watershed lies outside the park. The Central Walbran is the last, largely intact portion of the unprotected part of the Walbran watershed as the rest has been highly fragmented and tattered by clearcuts. Logging company Teal-Jones has 8 cutblocks planned for the Central Walbran Valley, of which one, Cutblock 4424, has been granted a cutting permit by the Ministry of Forests. At this time, the company has not moved to log Cutblock 4424, but is actively logging other areas near the park boundary.